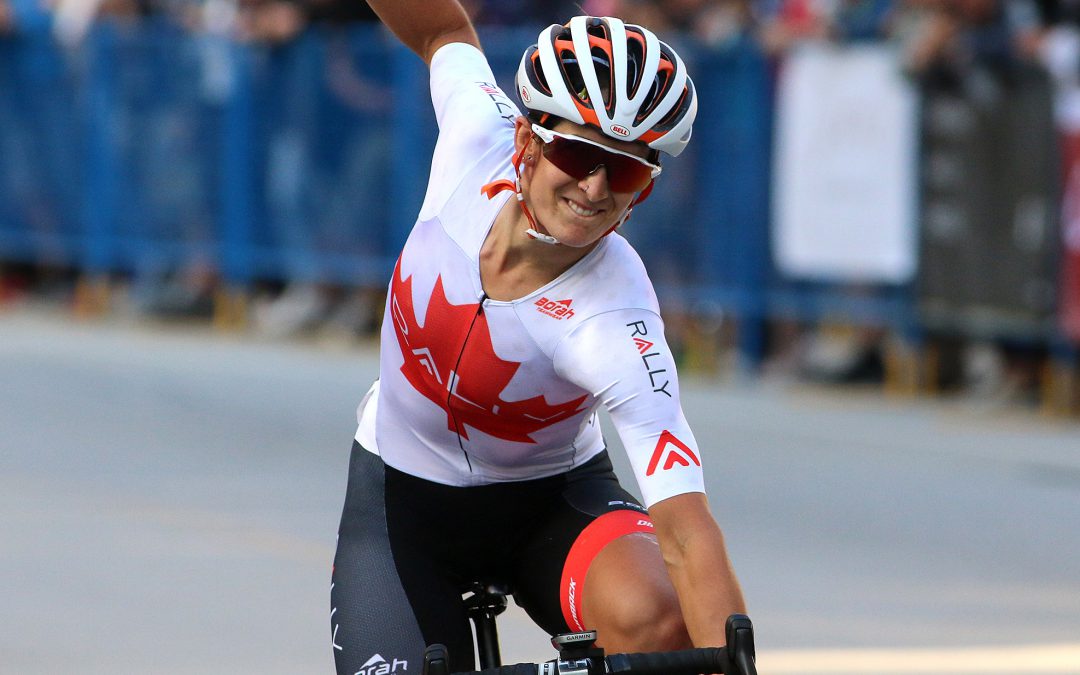 The 30-year-old Coquitlam native has become one of Canada’s most accomplished bike racers because, six years ago, she wanted to ride in the Whistler Gran Fondo.

Bergen finished fourth amongst all the female riders in the 120 km event that is geared more for recreational cyclists than racers. Last year she won the Canadian criterium championships, then quickly followed that up with a win in the women’s event at the New West Grand Prix and second place finishes in the Gastown Grand Prix and PoCo Grand Prix. All the races are part of the BC Superweek series of nine races that will run across the Lower Mainland from July 5 to 14.

Bergen didn’t set out to become a professional bike racer. She was commuting on a mountain bike from her family’s home near Coquitlam’s Mundy Park to architecture school at BCIT in Burnaby when, she said, her competitive nature led her to set personal challenges to ride faster than the other bike commuters on her daily route. She even pumped her bike’s heavy knobby tires to their maximum capacity so they’d roll easier and quicker on pavement.

With extra money from a scholarship Bergen earned in her final year of studies burning a hole in her pocket, she decided to raise her cycling game —and make it a bit more efficient on her legs — by buying a road bike and shoes. That allowed her to explore routes further afield from her usual routine. She climbed Mt. Seymour, then she did it and Cypress on the same day.

On the ride to Whistler, Bergen said she was enthralled when groups of cyclists working together would pass her.

“This is freaking cool,” she said. “It’s sweet and fast and efficient.”

The experience fuelled Bergen’s competitive nature even further. She connected with a coach in Vancouver, joined a local club then started entering amateur races like the Tuesday night criterium races that used to circumnavigate a course out at the University of British Columbia and are now based in Burnaby.

Bergen said her learning curve was steep, but she absorbed a lot of information about training, race tactics and team dynamics from her teammates and other competitors.

“That was the first time I’d been exposed to getting direction,” Bergen said, adding some of her mentors included Canadian Olympian Denise Ramsden and veteran pro racer Leah Guloien, who had experience in big time women’s races in Europe like the Ladies Holland Tour and the Route de France.

Bergen said her naivety about the rigours of top level bike racing probably worked in her favour. She said she was driven by a “reckless passion,” and an unflappable belief that she could succeed if she worked hard enough.

“It takes hard work, but that’s the one skill I can bring,” she said.

After learning her trade with smaller amateur teams, Bergen turned pro with Rally/UHC Cycling in 2017. That meant instead of rubbing elbows with other racers in a tight, flat circuit around a Burnaby business park, she was hitting the road in multi-day races like the Santos Women’s Tour Down Under in Australia, the Tour of the Gila in New Mexico and the Amgen Tour of California.

At the end of June she’ll be at the Canadian championships in Gatineau, Que., trying to retain her jersey as the national criterium champion.

After BC Superweek, where Bergen expects to defend her title in New West and fight for the top step of the podium in Port Coquitlam and Gastown, she is headed for Europe to compete in La Course, a one-day event organized by the Amaury Sports Organization, the same company that puts on the Tour de France. She’ll also race in RideLondon that is a legacy of the 2012 Olympics in that city.

Bergen said the tight quarters of North American criterium racing are good preparation for racing on the narrow roads of Europe, where positioning and timing can make or break a result.

But, she said, racing in front of a hometown crowd is special, especially when so much of her season is spent away from Greater Vancouver.

“It’s a bomb,” she said. “There’s a really fun undertone to it that now you’re racing in my backyard.”